One of the curiosities of Anglican practice, compared to other Protestant traditions, is the use of a number of books that aren’t in the standard Protestant Bible.  These books are found in the Greek version of the Old Testament and are collectively known by different names.

Some call them the Deuterocanon, which means “second canon.”  This is the approach taken by the East and by Rome; they’ve decided these books belong in the Bible as a sort of “second round” of Old Testament writings.  They aren’t as old as the rest of them, hence their rejection by Jews, but they still pre-date Christ and represent the history and progress of Jewish thought and religion in the Second Temple era – after Israel’s return from exile.

This problem with this view is that some of the Early Church writings indicate that the Church should only count as canonical (for the Old Testament) the same books that the Jews do.  It’s not a unanimous or clear voice, but the objection existed.

Others call them the Apocrypha, which means “hidden” or “uncertain” or “false.”  This is the approach taken by Protestant churches; they’ve sided with certain 16th-century Reformers who argued that the books not found in the Hebrew Bible don’t belong in the Christian Bible either.  Therefore we should just forget about Wisdom, Sirach, Baruch, and the rest; we don’t know much about their origins anyway.  It’s not like the Jews have these writing in their Bible, after all.

The problem with the view is that we don’t know much about the origins of the rest of the Old Testament either.  Who wrote Joshua and Judges and the books of Samuel and Kings and Chronicles?  How much of Jeremiah was written down by him versus by his scribe?  Who arranged the Psalms in their current order?  Additionally, although the official teaching of the Early Church is unclear regarding these books, they certainly quoted them an awful lot – sometimes more than the undisputed Old Testament books.  So ignoring them completely seems too much of an extreme.  Finally, many who consider these books apocryphal point to the fact that the Jews (also) reject them from the canon.  But they never made any statements of their canon until after Christ – why on earth should Christians be taking their cues from the generation of Jews who rejected Christ?

In our Articles of Religion, neither term (with their opposing agendas) is used.  Article 6 refers to them as “the other books” which is a phrase that could be taken either as an extension of the Old Testament canon or as a separate, third, group of writings within the Bible.  Three things are going on here.

Earlier in Article 6, we read “In the name of the Holy Scripture we do understand those canonical Books of the Old and New Testament, of whose authority was never any doubt in the Church.”  This may be taken as an admission that the “other books” might be understood to be Scripture after all.  But in the end, a line is definitely drawn between the proper Old Testament and the “other books.”

Ultimately this sets up for us a two-tiered Bible.  On one level we have the definite scriptures (the Old and New Testaments) and on the other level we have the semi-scriptures.  We treat them equally by virtue of the fact that we read all of them.  We treat them differently by virtue of the fact that we stick to the stricter (Hebrew) canon when talking theology.

A different name for this group of writings that has come up specifically in Anglican parlance is the “Ecclesiastical Books.”  This phrase acknowledges 1) that those books are read by the Christian Church, not by the Jewish people, and 2) that those books are set forth by the authority of the Church, not necessarily by the infallible voice of the Holy Spirit.  In this sense, then, the Ecclesiastical Books are akin to other things set forth by the Church: like the Creeds, the Prayer Book, the 39 Articles of Religion, the Catechism.  None of these things are infallible in themselves, but they are authoritative in the Church (as opposed to over the Church) due to their sound Scriptural basis.

How to describe them…

One of the big challenges that dogs any discussion of the Ecclesiastical Books is the fact that, after a few centuries of Reformation tradition, we’ve developed a lot of buzzwords and catch-phrases to describe the Bible: “the Word of God,” “the Word of the Lord,” the “inspired writings,” “the sacred text,” “canonical.”  To what extent can terms like these be applied to the Ecclesiastical Books?

Two main barriers to answering this question quickly and easily stand in our way: first is the challenge of what these terms actually mean (and if different people use them in different ways from each other) and second is the fact that few, if any, of today’s buzzwords were the buzzwords of the 16th century when most of our formularies were developed.  Among our official documents, two references can be found in the Book of Homilies (authoritative in our tradition according to Article 35).

In the Homily of Obedience, Part One, the book of the Wisdom of Solomon is described as “the infallible and undeceivable word of God.”

In the Homily Against the Peril of Idolatry, Part Three, the same book is described as “the word of God.”

Based on these examples, we do have precedent in our tradition for saying “The word of the Lord / Thanks be to God” after a reading from the Ecclesiastical Books.

When & How we actually use them

Last of all, and perhaps most importantly, are the practical questions of when and how we actually use the Ecclesiastical Books.

English Bibles until sometime in the 18th century contained the following books in between the Old and New Testaments:

1 Esdras, 2 Esdras,
Tobit, Judith,
The rest of Esther (interspersed throughout),
Wisdom (of Solomon),
Ecclesiasticus (Sirach),
Baruch with the Epistle of Jeremiah,
The song of the three children, the story of Susanna, The idol Bel and the Dragon (additions to Daniel),
The prayer of Manasseh,
1 Maccabees, 2 Maccabees 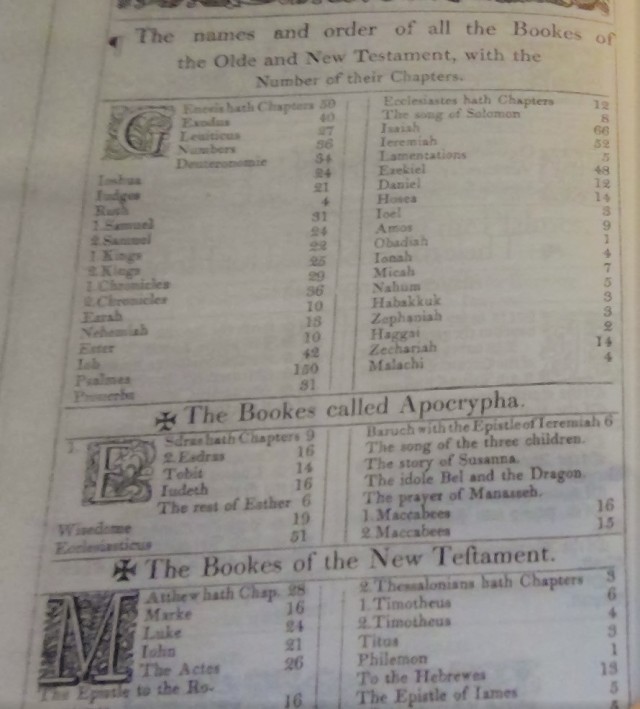 from a facsimile edition of the English 1611 (King James) Bible

Despite having all these books, they were not all included in the lectionaries of the original Prayer Books.  Tobit, Judith, Wisdom, Ecclesiasticus (Sirach), and Baruch were read in full from September 28th until November 23rd.  By comparison, some of Exodus, and most of Leviticus, Numbers, Ezekiel, and Revelation were omitted.  Later lectionaries expanded these readings to include other books like 1 & 2 Maccabees, the additions to Daniel, and one or two samples from 2 Esdras.

Parts of the Song of the Three Young Men (or, of Azariah) have always been an option in the Morning Prayer liturgy as a canticle to sing or say after the New Testament reading.  The Prayer of Manasseh, similarly, has become another one of the optional canticles.

The Communion service’s lectionary did not include readings from any of the Ecclesiastical Books, but it also had almost no Old Testament readings at all, anyway.  Instead, material from these books showed up in other (non-essential) parts of the liturgy like antiphons, introits, and graduals.  The Lutheran tradition also uses these.  But now that modern Communion service lectionaries do have Old Testament readings and responsory Psalms, we have included approximately nine readings from the Ecclesiastical Books spread across the three-year cycle.

Thus, the diligent church-goer today will hear or read from the Ecclesiastical Books in the Daily Office through much of the autumn, approximately three times a year in the Communion service, and periodically as a canticle in the Daily Office.

I'm an Anglican Priest and a sci-fi geek. Therefore, I write about liturgy & spiritual formation, theology & biblical studies, and Doctor Who. But I keep those blogs separate so I don't confuse too many people!
View all posts by Fr. Brench →
This entry was posted in Devotional and tagged Apocrypha, authority, Bible, history. Bookmark the permalink.

4 Responses to The Ecclesiastical Books